It’s been quite a week! I got to see the 49ers win their 2nd game of the season, I attended a number of holiday parties, free agency is heating up in the MLB (No Stanton or Ohtani blah), and many other events in between.

I felt a little tired in the beginning of the week, but it subsided after a few days or so. Which is why I always emphasize power naps. 😀

I’m also about to send out Christmas/holiday cards. 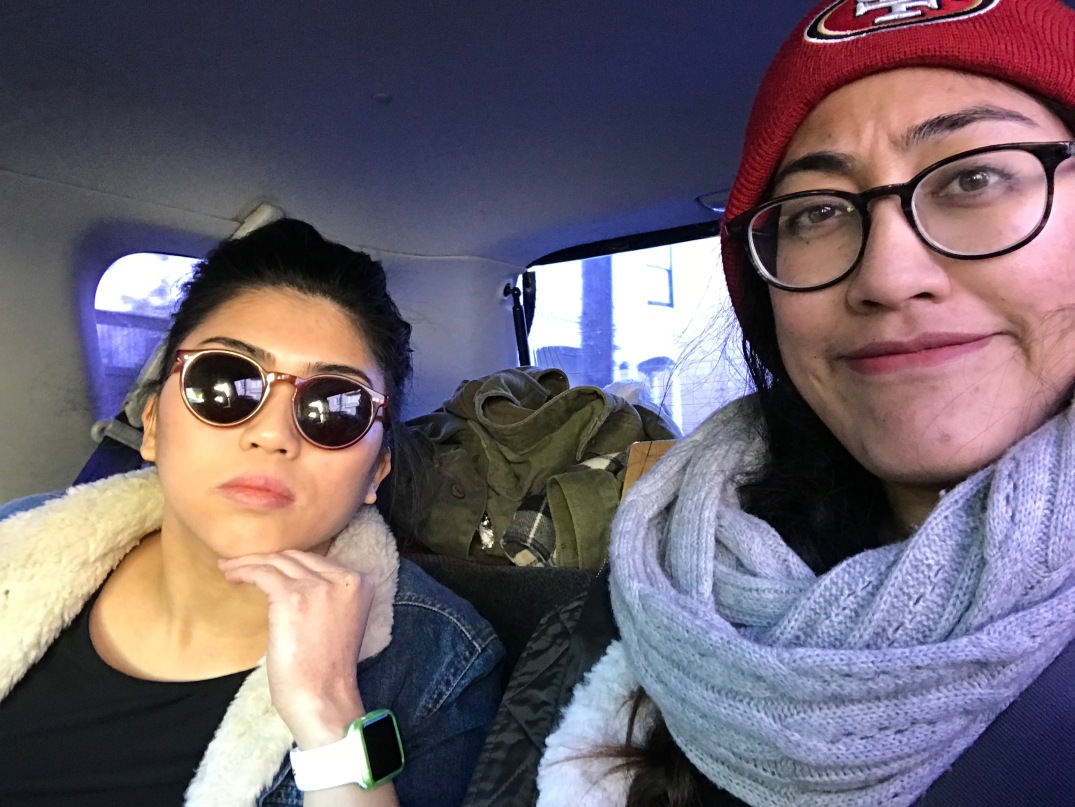 We watched the Niner game. Super exciting! JIMMY G!! My guy. He’s so pretty. LOL. BUT WE WANT WINNERS!!!

After that, some of us headed over to our aunt’s house in Colma for a birthday celebration. You know what that means: FOOD! 😛

But before we got there, we made a stop at the cemetery to visit our grandparents with Mom & Dad. 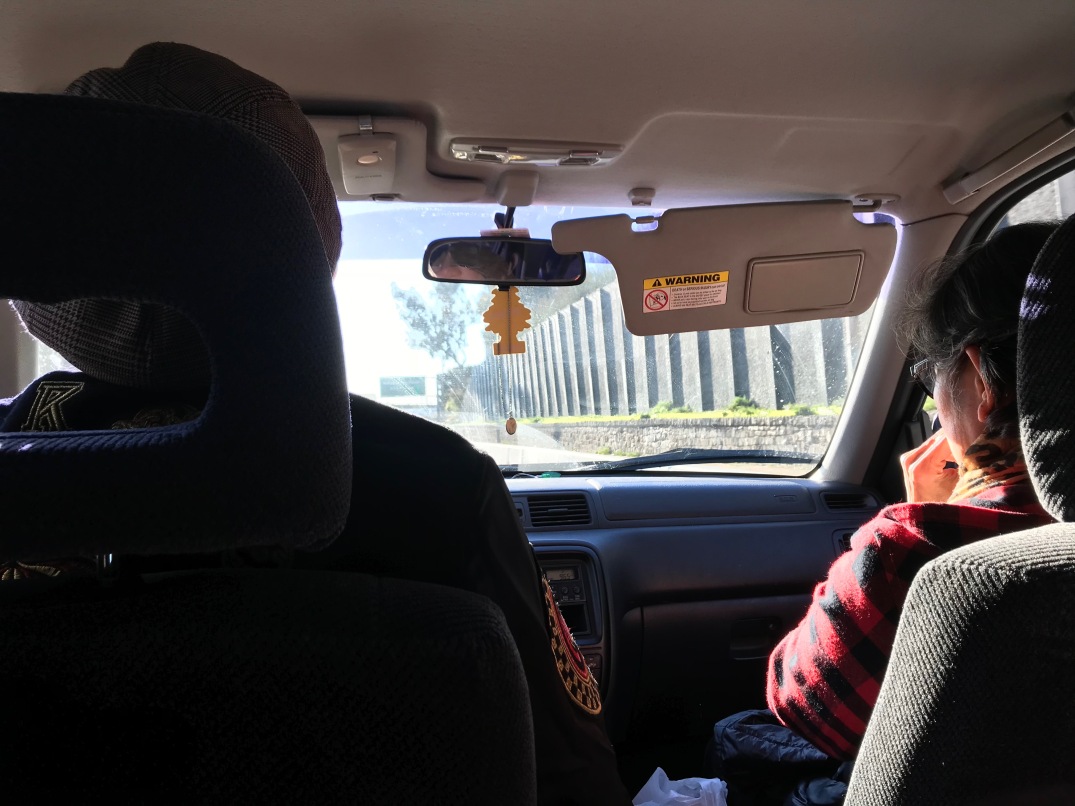 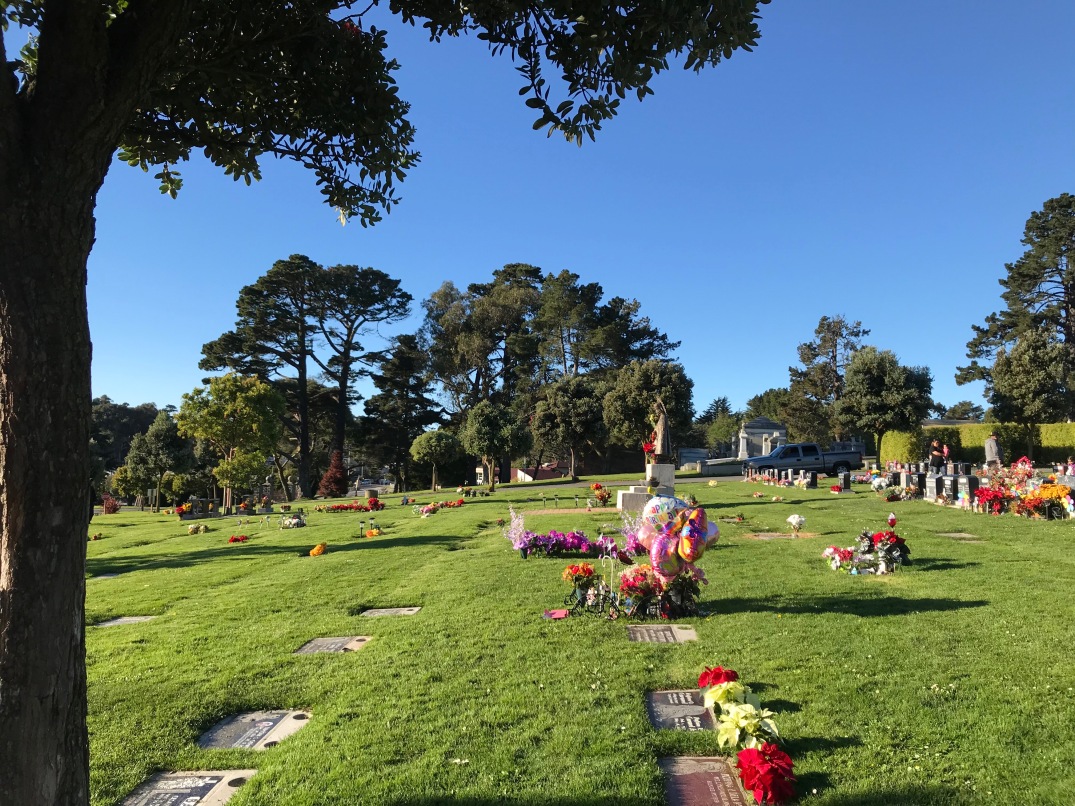 It’s been a few years since they passed, so I get a bit emotional whenever I stop by. Dad even played a few of their favorite songs by Lawrence Welk (currently listening to it as I type). They were two of the loveliest people who instilled so much in me and the rest of the grandchildren. Love you, Lolo and Lola. ❤

After the cemetery, we went to pick up some catering. SISIG!! 🙂

We spent a majority of our time in her room watching TFC and GMA shows. TFC FTW!!!! 🙂 The food was good + dessert. YES!!!

Look at the layout! I was ready for the lumpia and sisig. 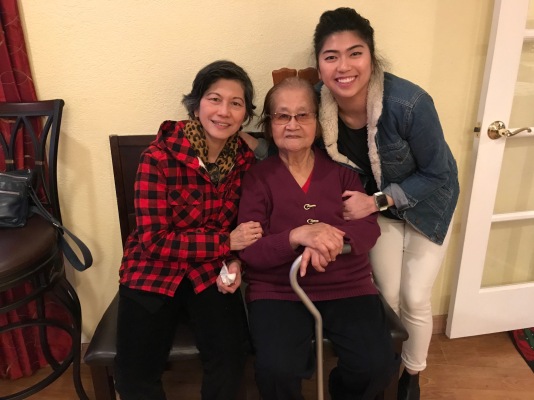 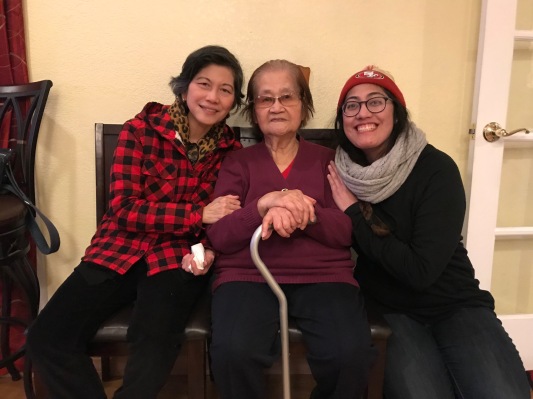 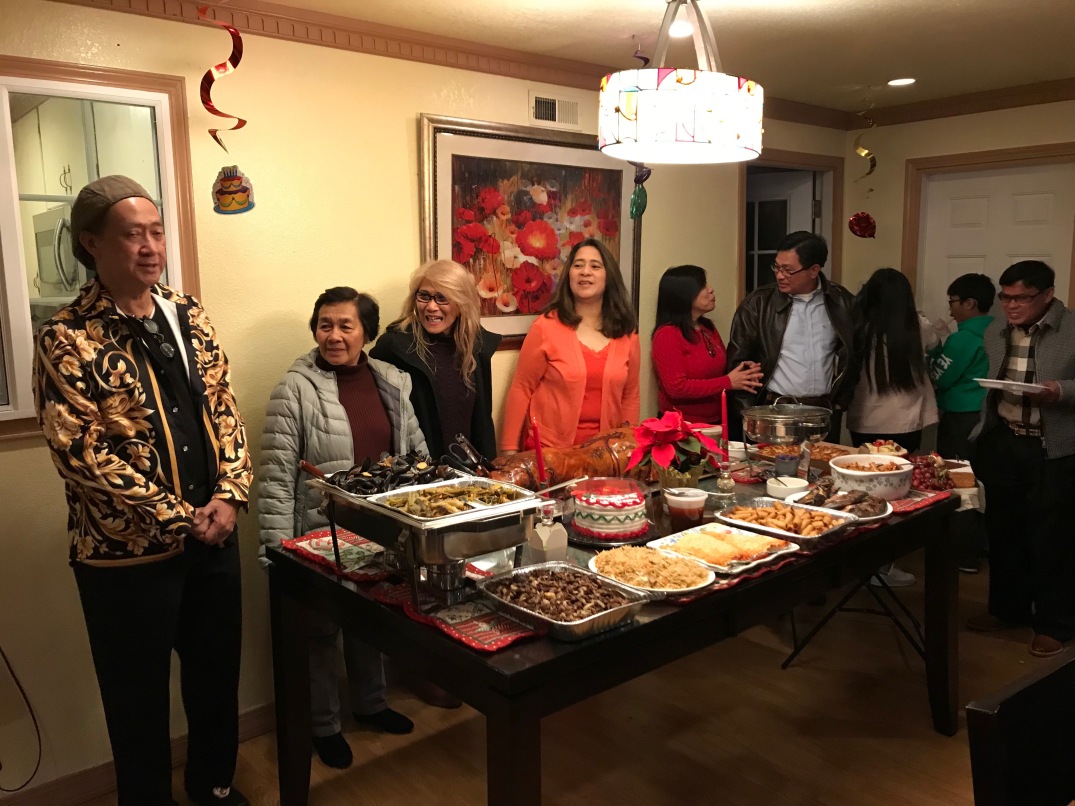 It was a fun party, but I was ready to sleep! Haha. 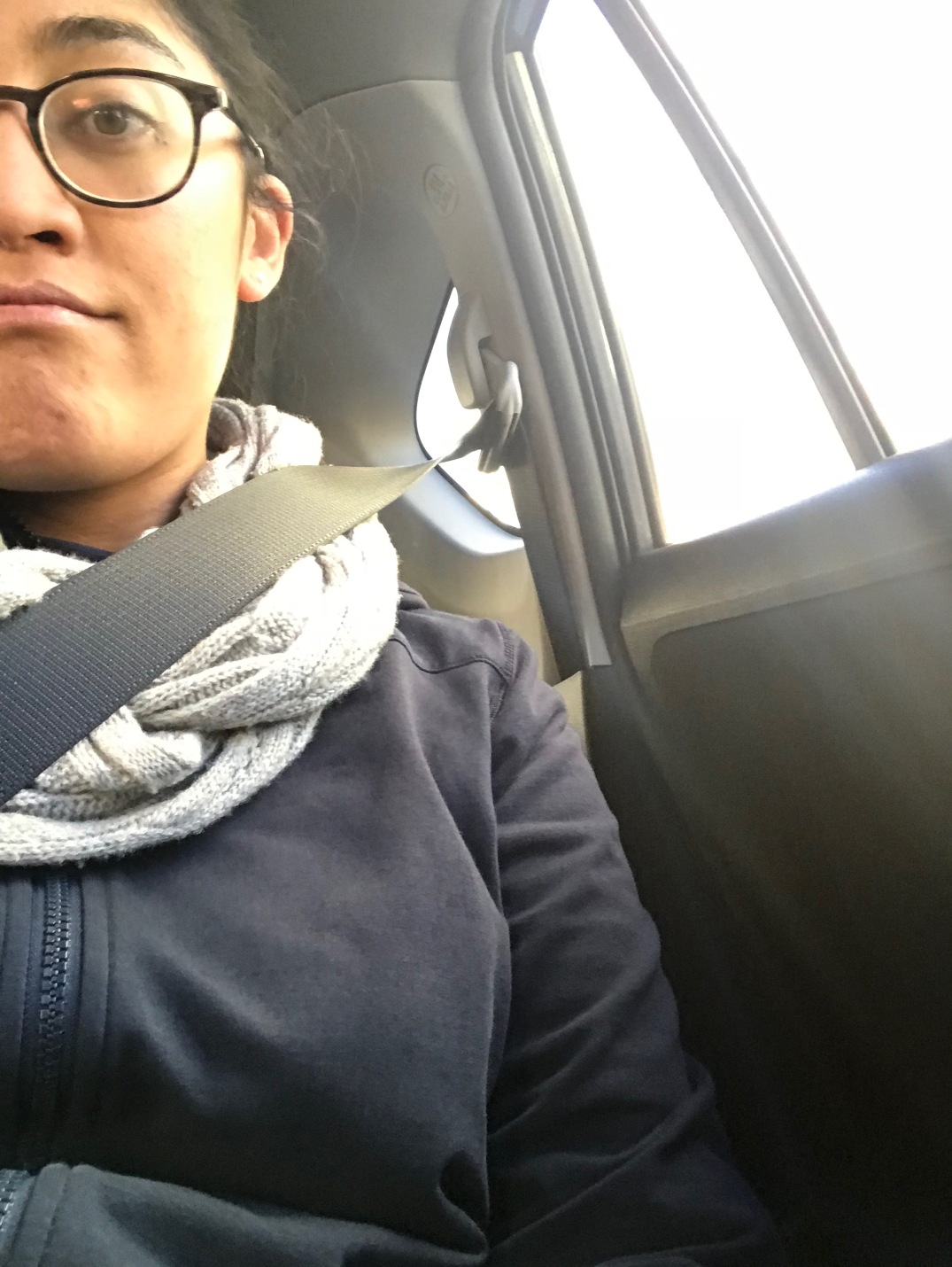 Lyft line to work. It was a chill ride. 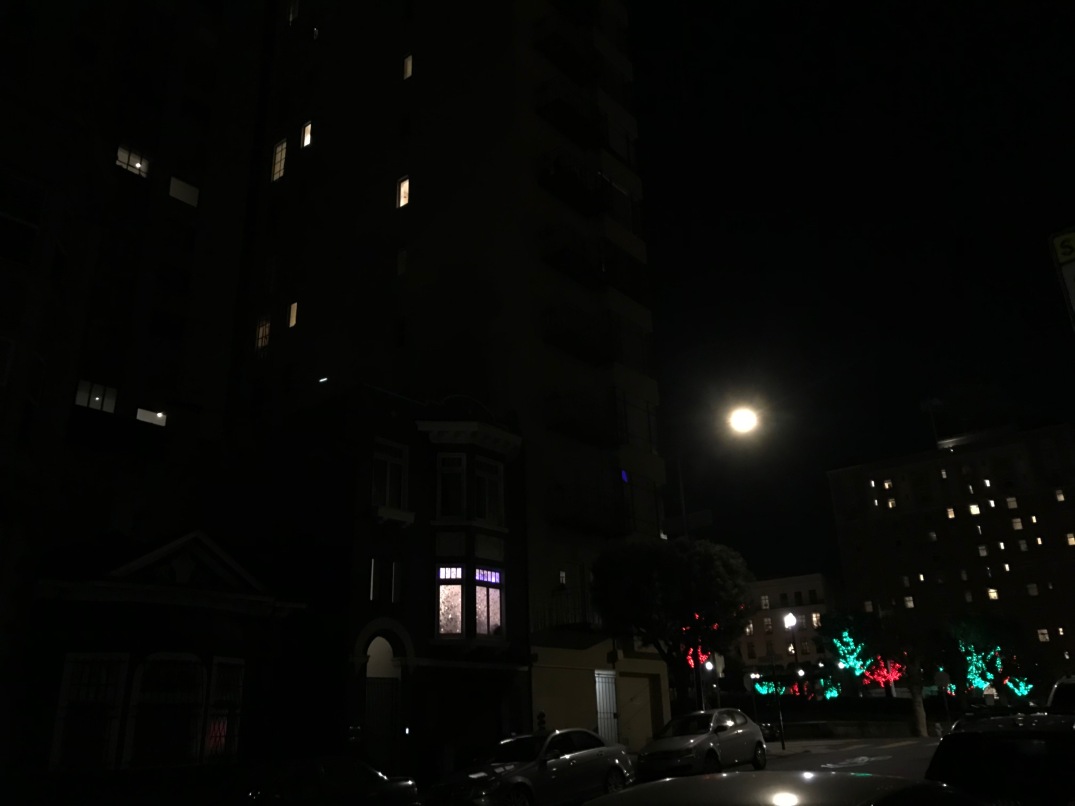 I hung out with the sisters and doggies once I got back. GREAT TIMES!!

Joined the bro to pick up Mom and get some groceries. 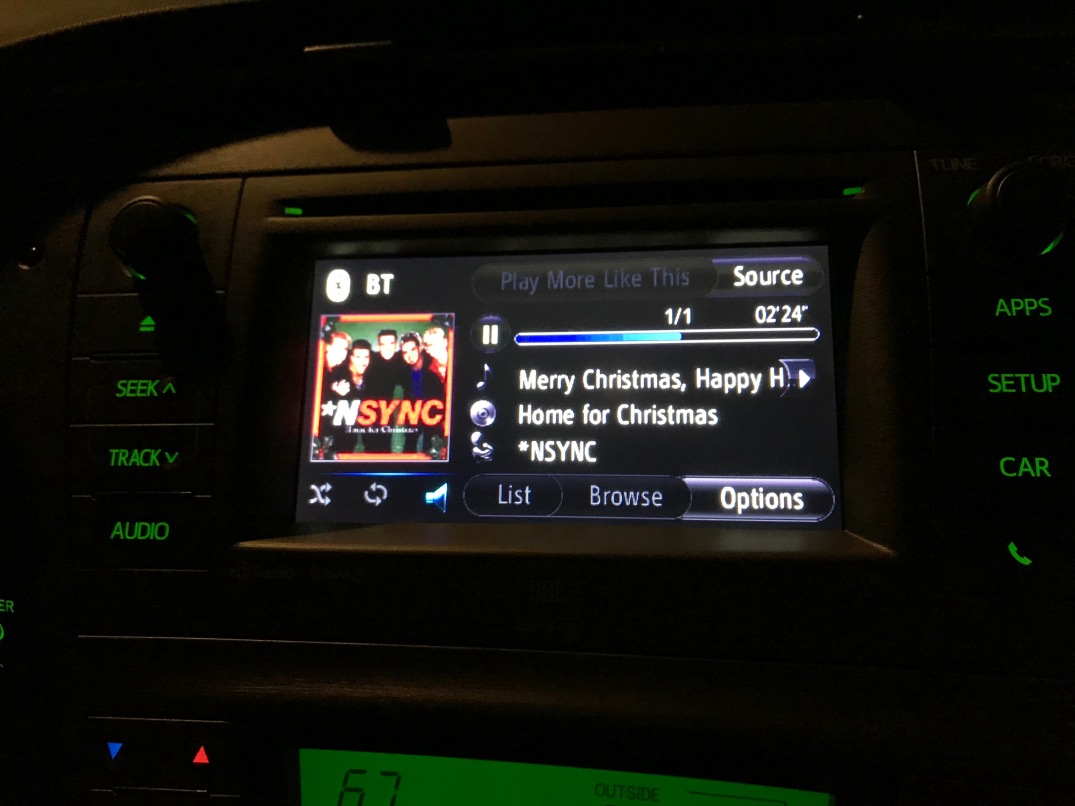 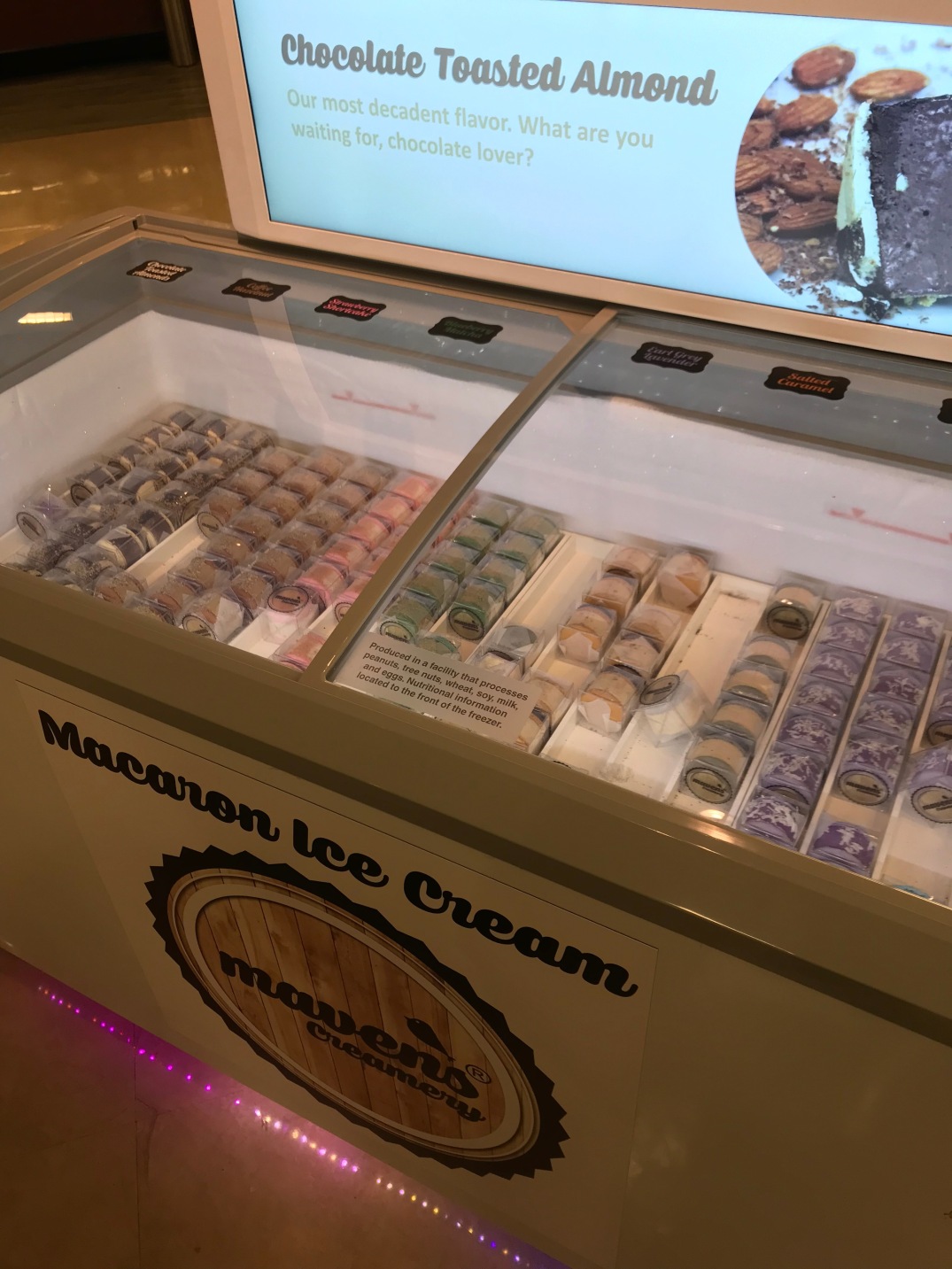 We saw this and had to try it!

Ended the night with the boss. Haha.

Decided to grab some lunch and make a cookie run. So good here.

The box of deliciousness.

BLT. Couldn’t wait to dig in.

I stayed up to watch some TV. Miss Carrie Bradshaw!

Definitely a cold morning. Beari and I wanted to stay in bed. So precious.

Bussing it to work. Let’s go!

Great dim sum place. I’ve only been there once, but I would definitely go back. 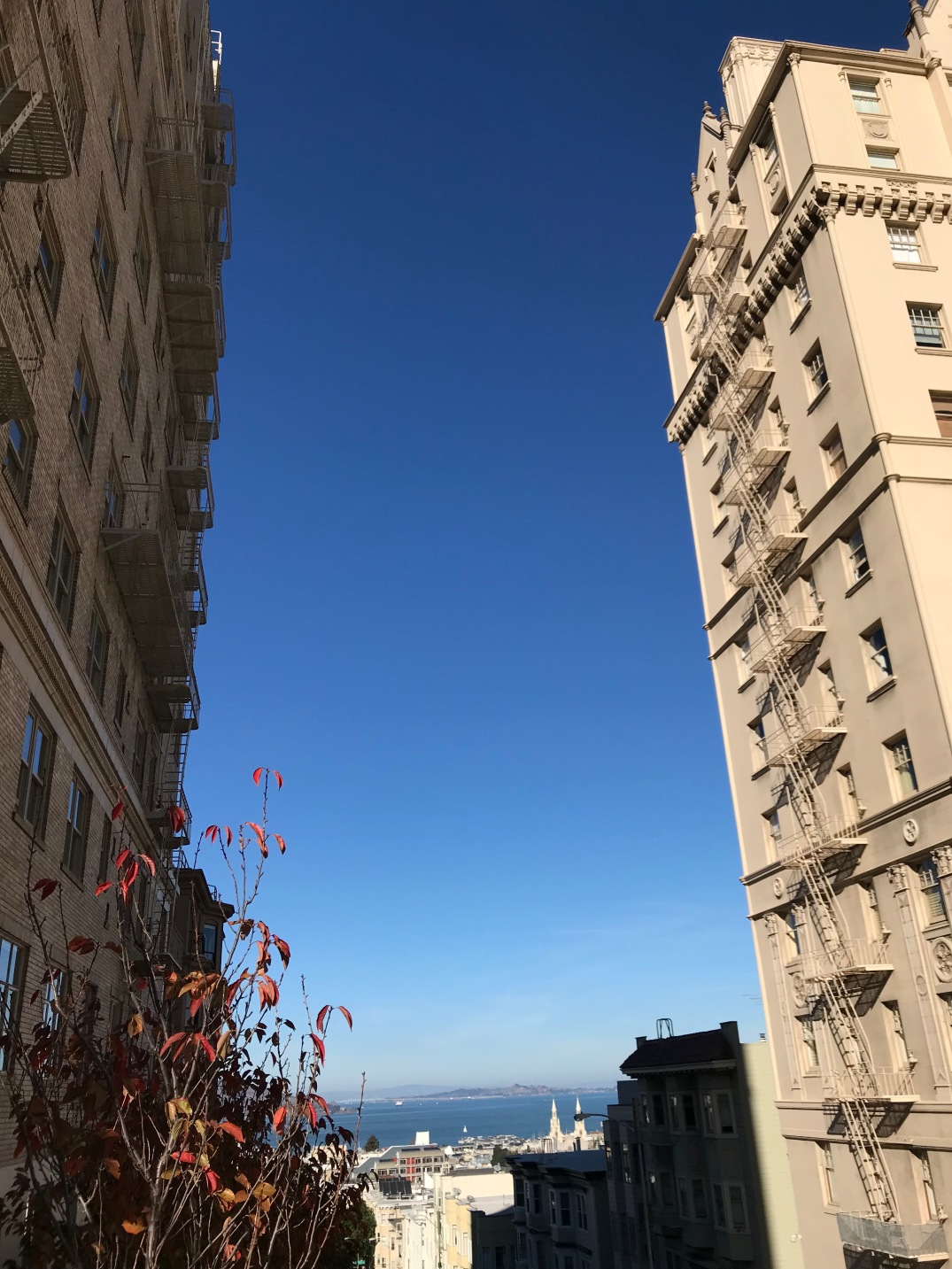 Decided to catch a glimpse of the water. 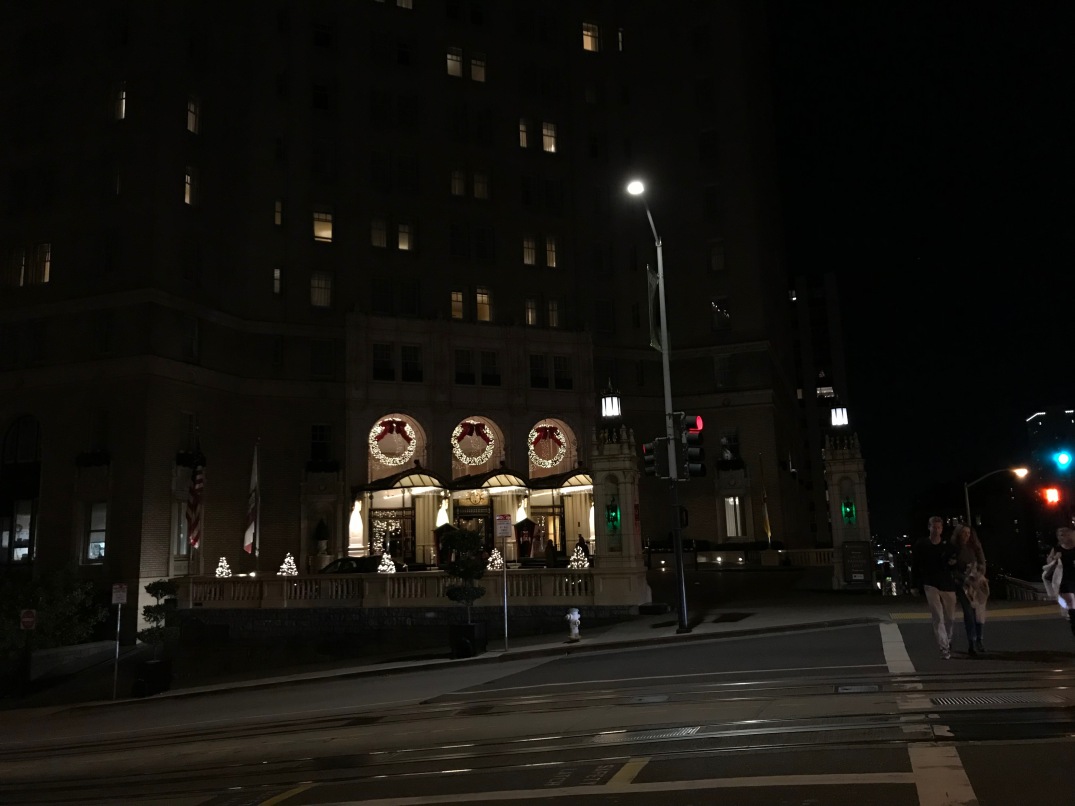 Mark Hopkins. The lights always draw me in.

Stopped by Union Square to admire the tree.

I dropped in at Lush and Uniqlo. Two of my favorite stores.

Salmon and brown rice for dinner! Mom’s recipe is the best.

TV and doggies. They’re both so sweet! 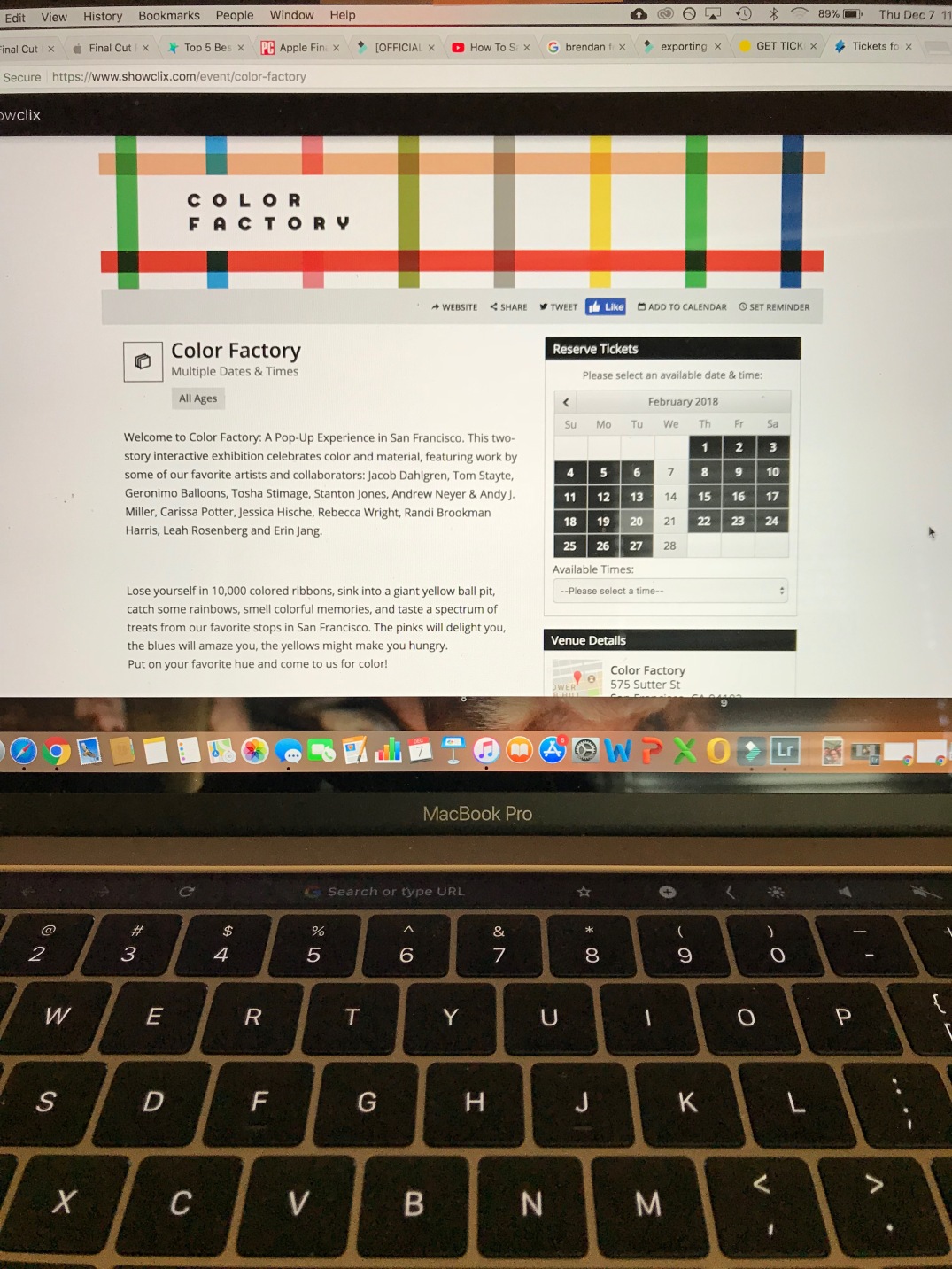 Woke up a little early to get tickets for the Color Factory again. Our bestie hasn’t gone yet.
I got tix, but I hope she makes it in February! 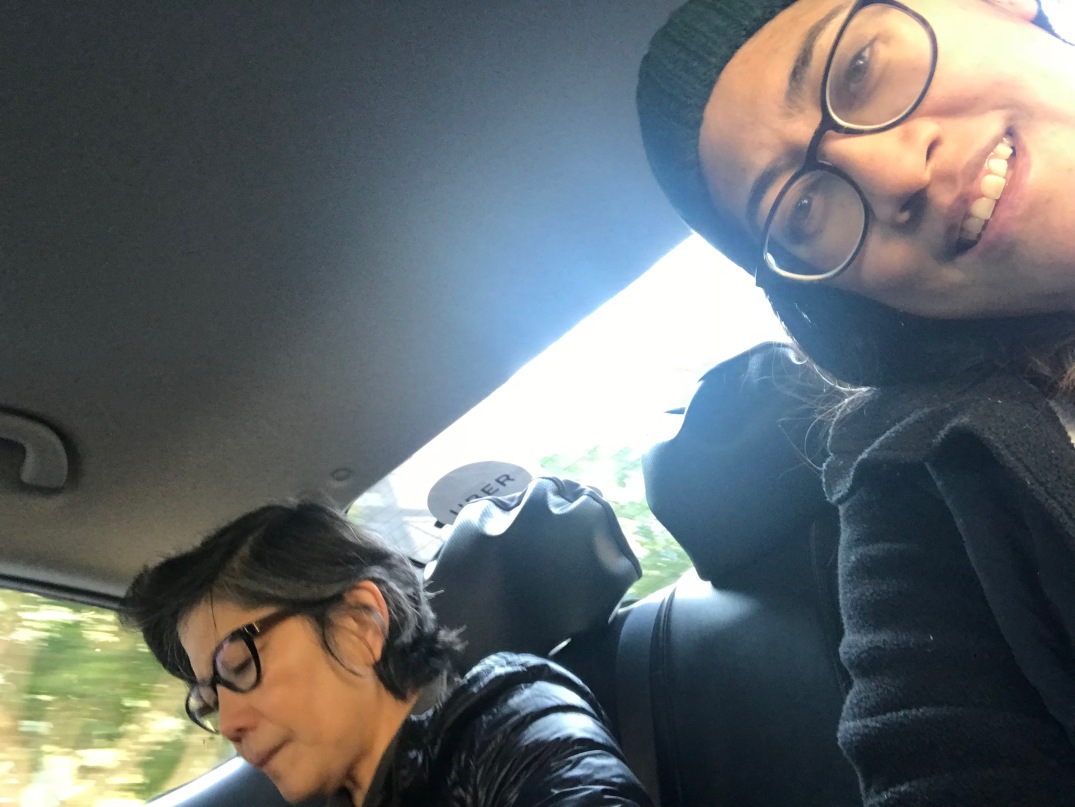 Commuting with Mom! I love our candids. Lol.

Treated myself to chicken over rice. 🙂

I carried my food with me on the bus. I was super excited to eat it. I love halal food. I had a lot of it during college. 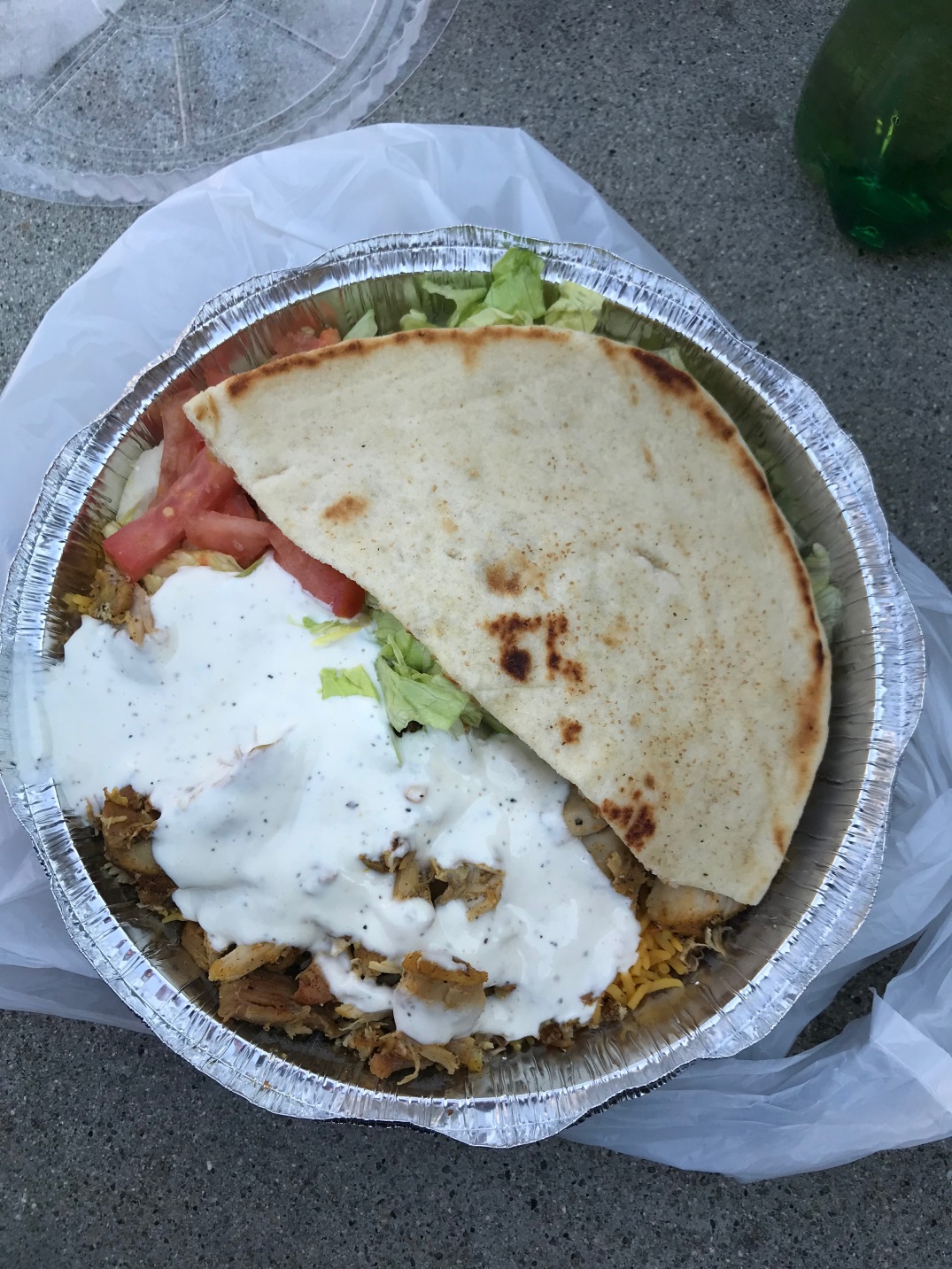 After eating, this man approached me. It was the same man who was kicked off the bus. I recognized him because of his jacket. Anyway, I was startled. Thankfully, my friend Jay showed up and asked him to leave the property. He complied. The man didn’t say anything to me, but it was just random. I was okay. The boss and coworkers were supportive. Thank you!!

Work went well, but I was super excited to have dinner and ice cream with the BFFs. 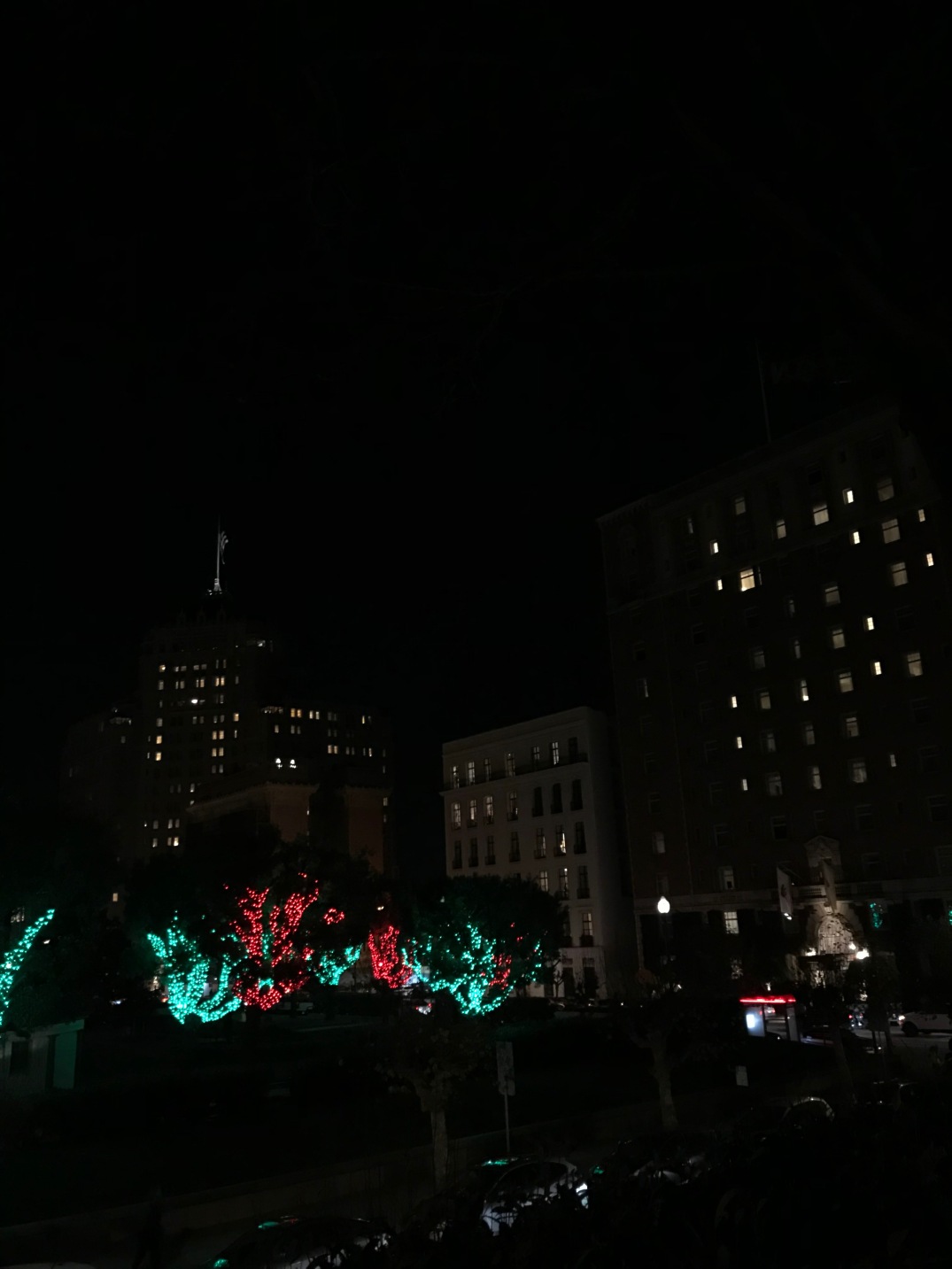 I waited a bit before taking the bus. I always admire my surroundings. 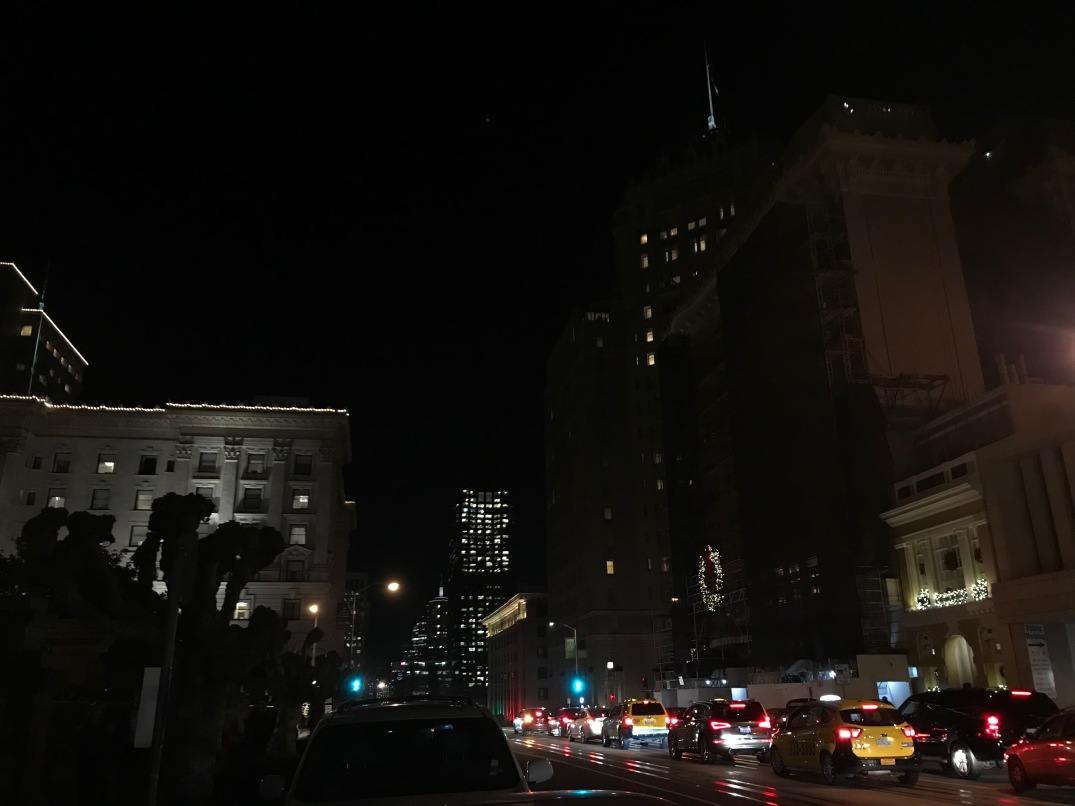 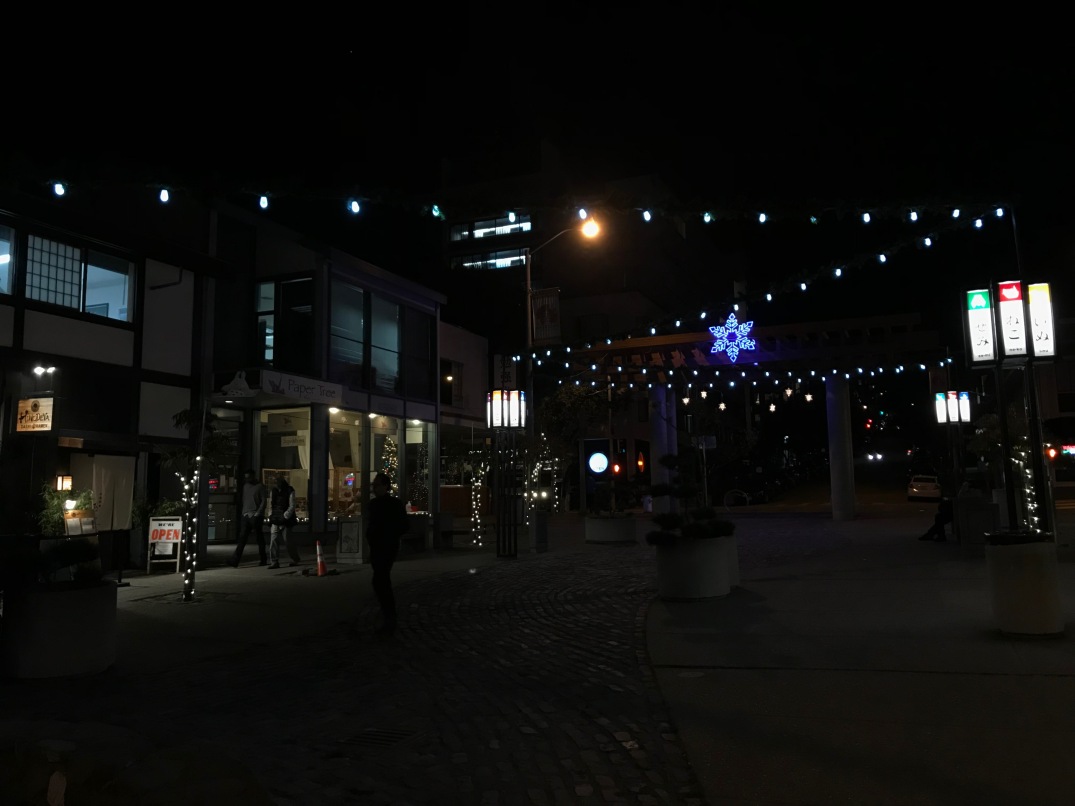 I waited around for Jamie and the twin. 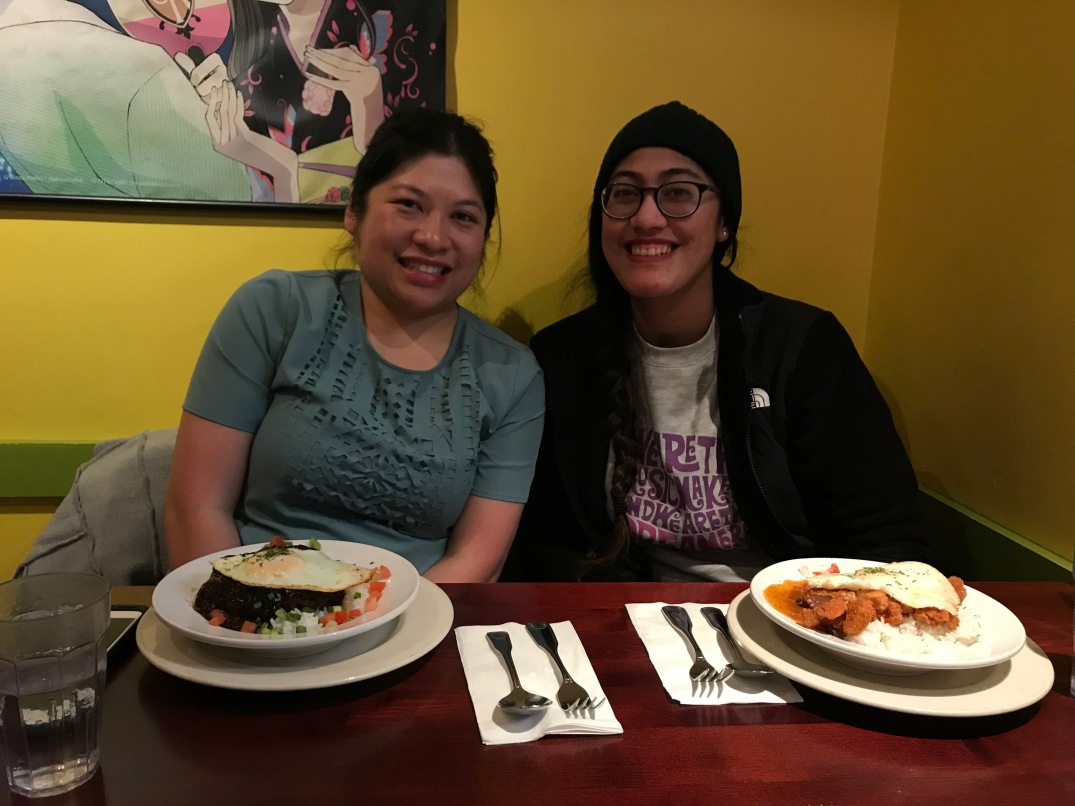 Bianca and her spaghetti. 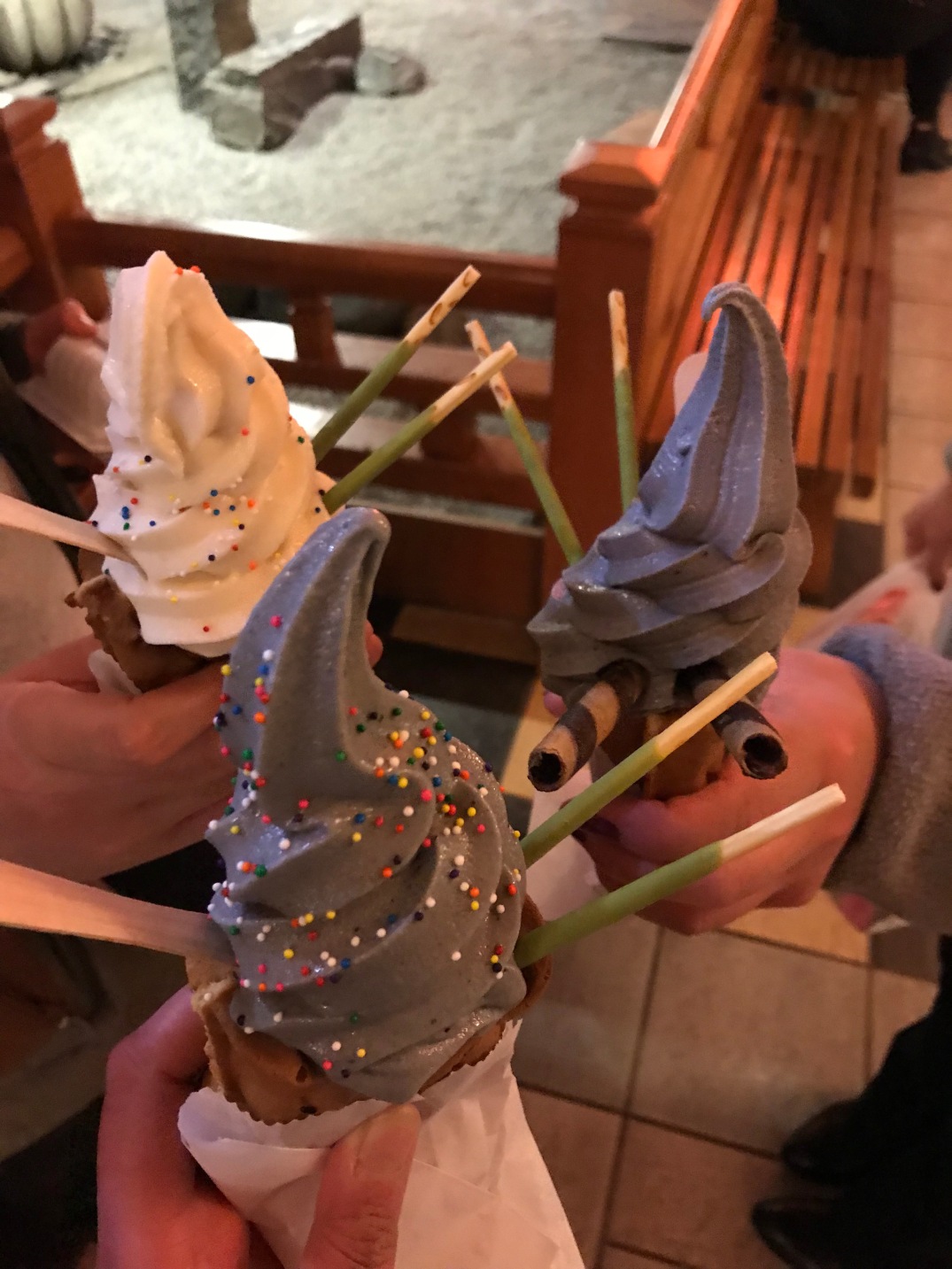 UJI TIME! Black sesame is everything.

It was a wonderful Thursday night!!

I got to sleep in for a bit. It’s the little things.

Bianca and I had to run some errands. 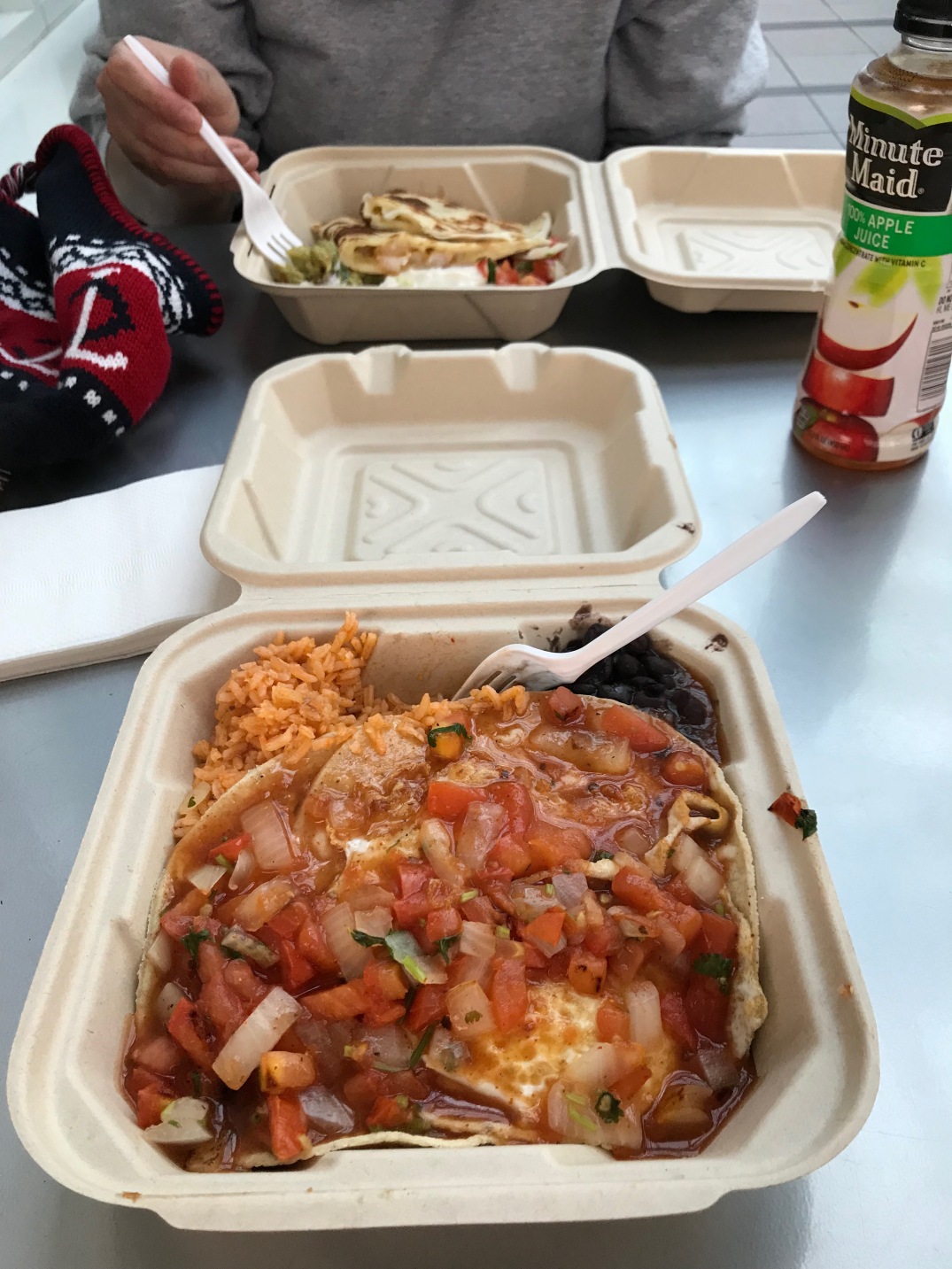 Making my way downtown. I love my scarf. ASOS ftw!! 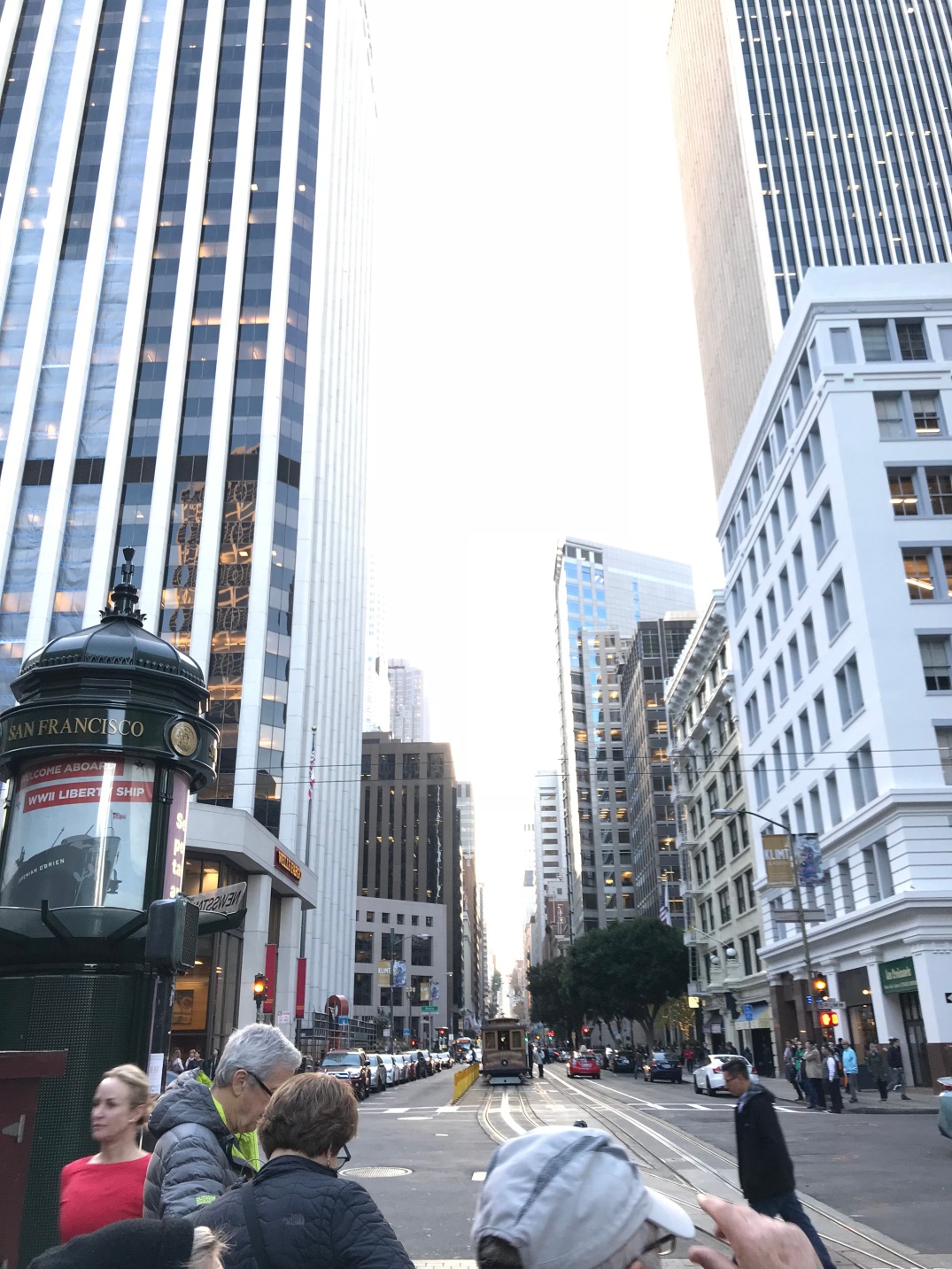 I was feeling fancy so I waited for the cable car. 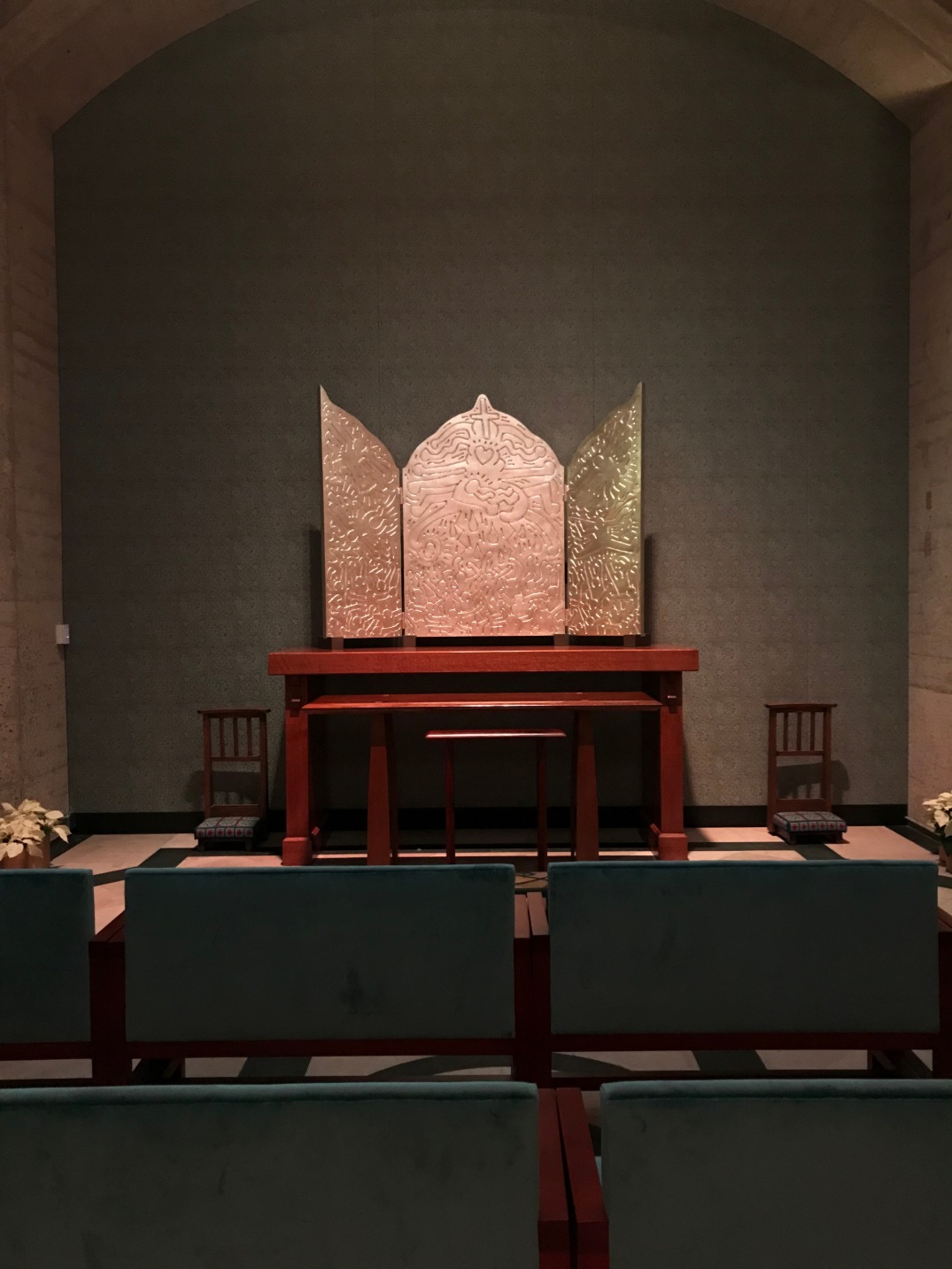 I visited the newly renovated AIDS chapel. LOVE IT! 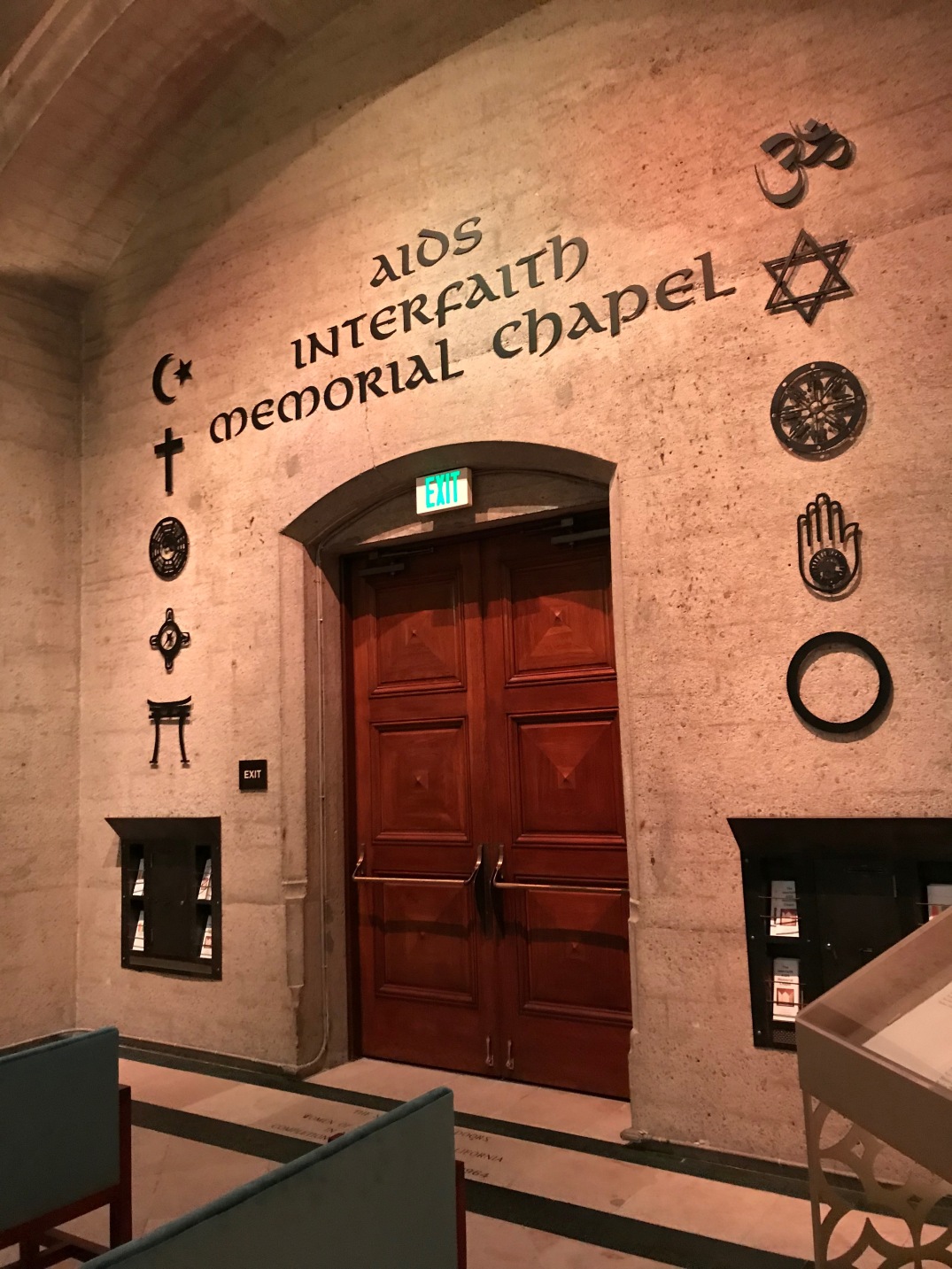 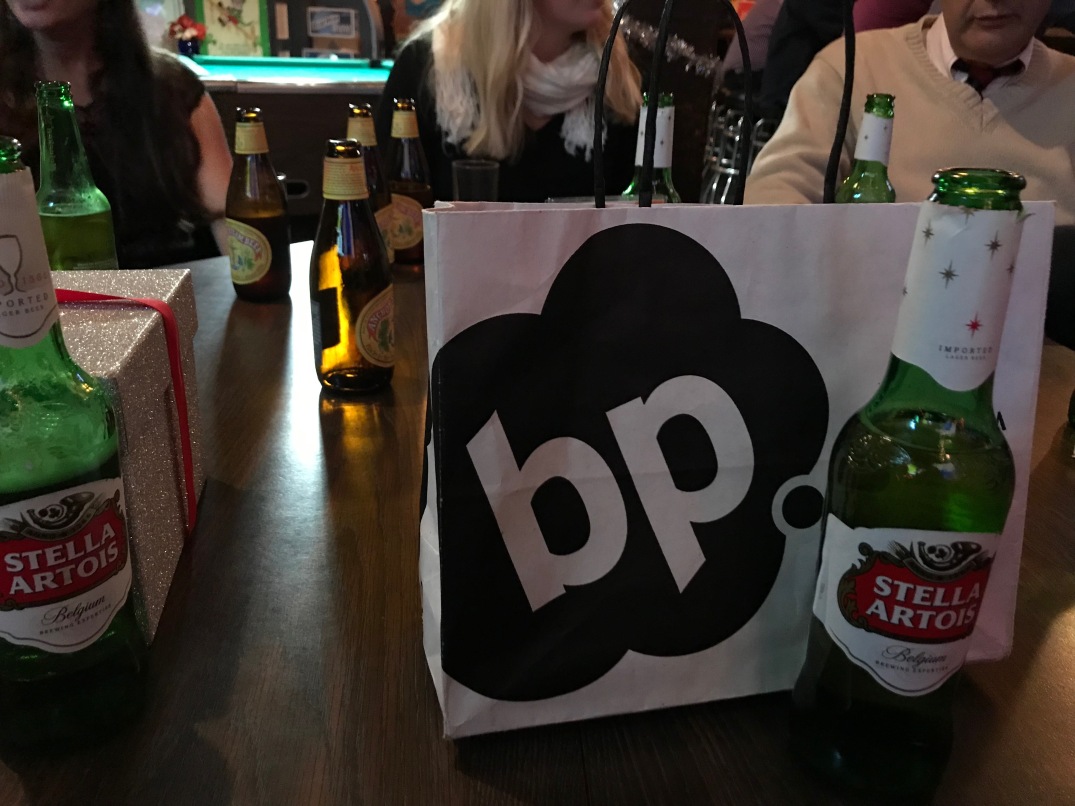 Holiday party #1. Some pregame festivities. It was a nice crowd.

Off to the Madisons! Super beautiful house. 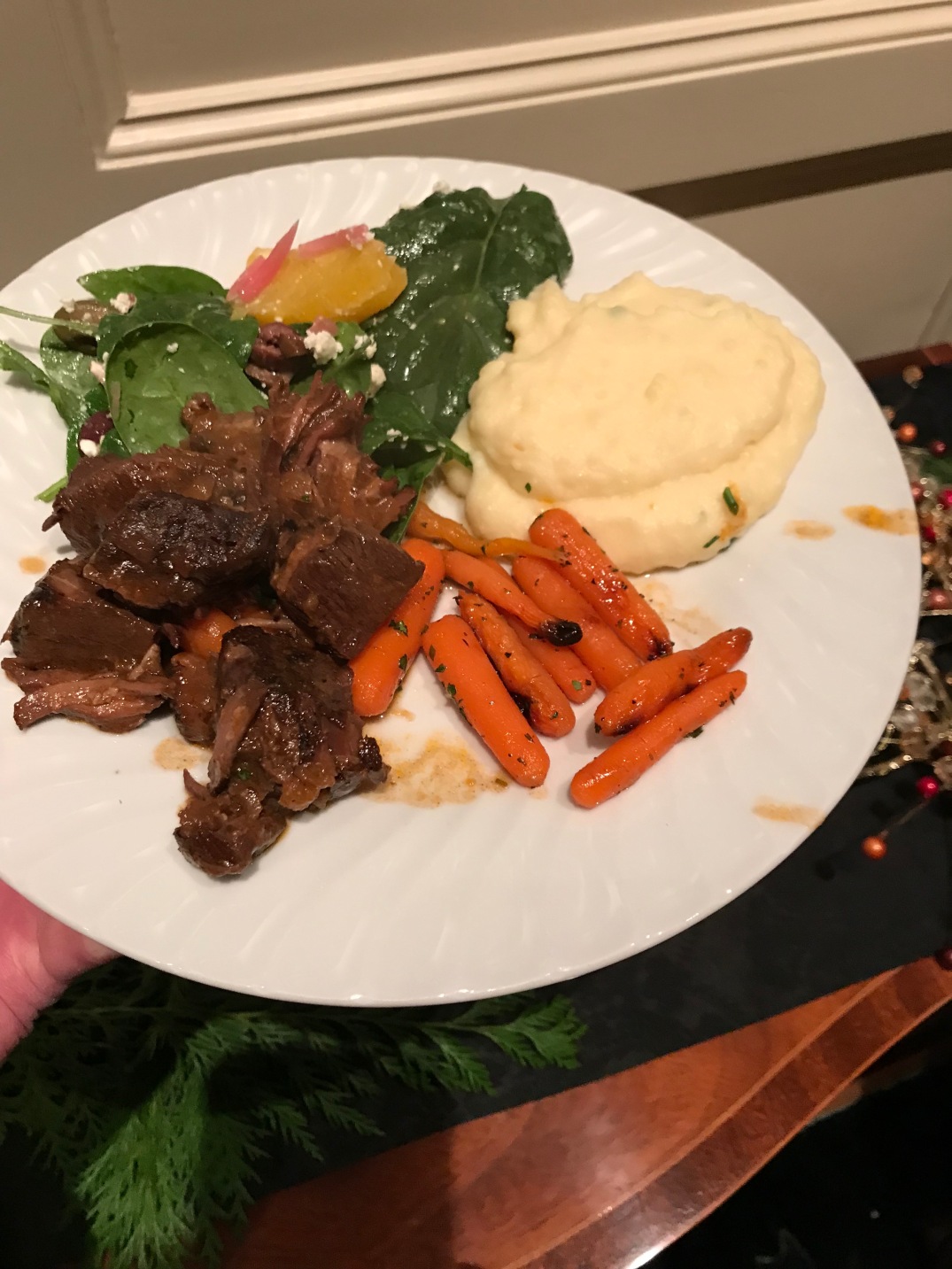 Thumbs up for the food! The meat was tender.

White elephant time! It was my first time playing.

Second to last card since diamonds were called last.

I ended up with a gag gift. LOL. A red & white nightie from Frederick’s and a Little Darlings VHS with a post it that said Love, Roy Moore. -_- #goodwill 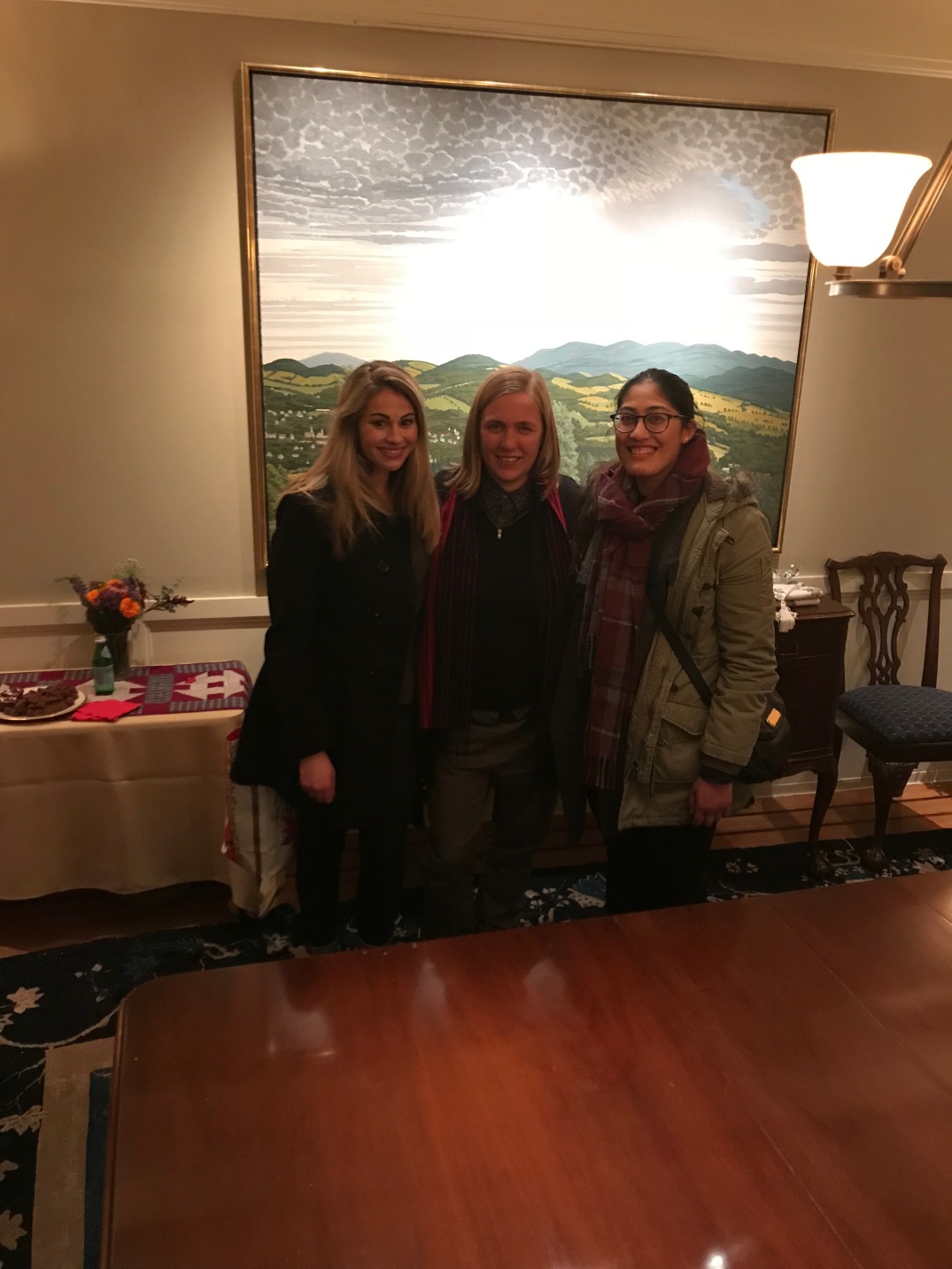 Angela, Susan, and myself. We missed Taylor a lot!

There was a small kickback afterwards so I decided to go.

It was a nice group of folks! I was pretty tired at this point. It was almost midnight.

In my comfy bed with Coco. I was ready to KO.

I got to sleep in which was nice.

I got ready for the staff party in Oakland. YAY!

On my way downtown.

Picked up some chocolate for the hosts. 😀 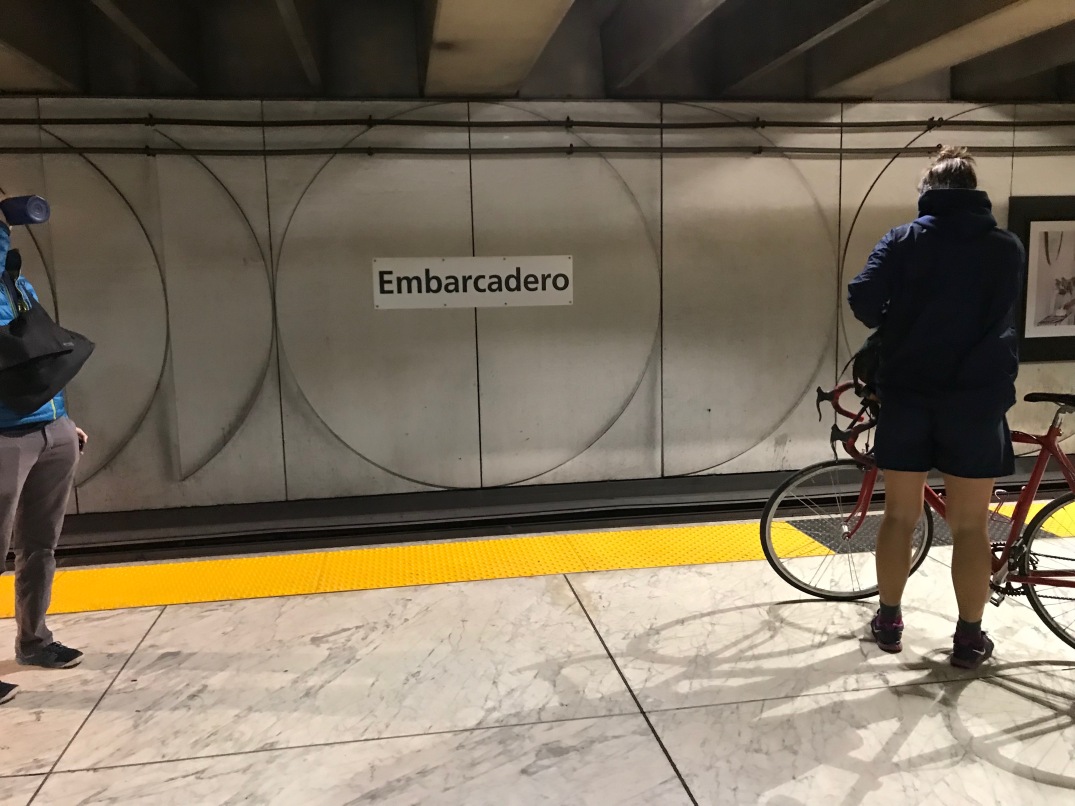 Waited for Susan and met up at Embarcadero.

She and I were confused about which station to get off at. We chose the right one! Haha.

We ended up at a bar while we waited for Cord called Make Westing.

Another Stella for me.

The table setup was so nice!

The food was great! The lasagna was delicious. Everything was awesome!!

We rewatched their wedding video! They’re both so wonderful. 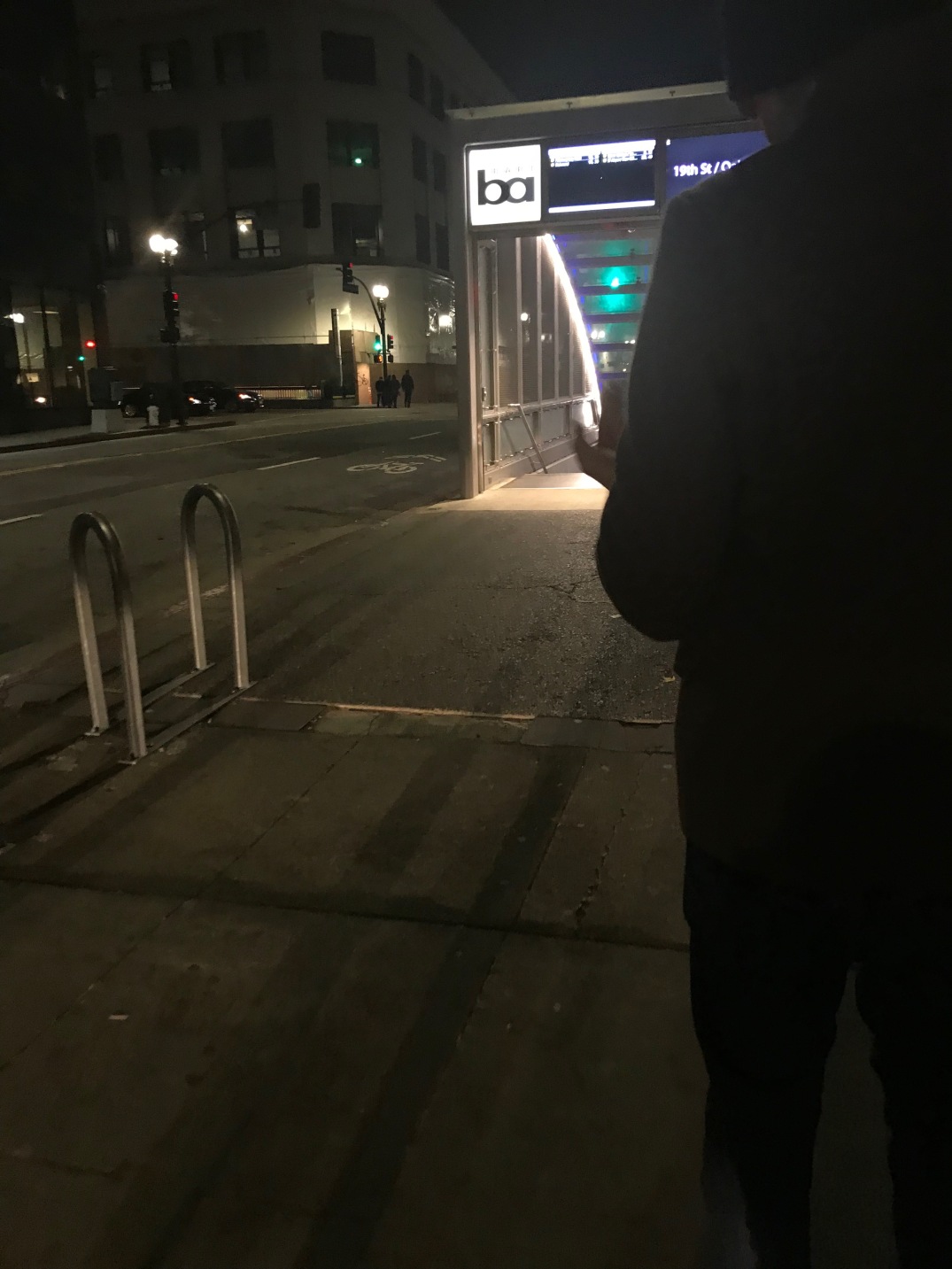 Time to head home! We got dropped off at the station.

I gotta mention the RHOA videos we watched. And the TLC shows. LOL.

We ended the night with exercise ball fails. Yay, Youtube!

We waited 15 minutes for an SF bound train.

Back in the city! I didn’t wait long for my train. I timed it perfectly.

The train was pretty empty. But the characters of SF were out and about.

It was a great week for me! I hope y’all enjoyed it. 😀

My holiday break is a few days away. I’m looking forward to sleeping in and activating couch mode yet again. HAHA.

Have a great week everyone.